When Detours Lead to Unexpected Doors

One of my favorite chapters in the entirety of the Bible is Acts 26. For some context, Paul has spent two years held in prison in Caesarea by Felix after being brought there due to a threat on his life by the Jews in Jerusalem (Acts 24). The first trial by Felix did not prove any case against Paul, but Felix kept Paul around and heard from him regularly in hopes that eventually that Paul would bribe him. But instead of trying to buy his freedom, Paul was more concerned with the eternal freedom of Felix and Drusilla. He presented the Gospel to them over and over again very bluntly and boldly, teaching of the resurrection of the dead and the judgment for those who were not in Christ.

Felix was eventually replaced by Festus. An equally political and corrupt Roman governor who sought favor with the Jews, Festus agreed to put Paul on trial yet again and hear the arguments. The Jews wanted Paul to come to Jerusalem again so that they could kill him along the way. Their only concern was the death of Paul, and their only way to do that was to get him away from the prison and on the road where they could take him out.

God's sovereignty is on grand display here just in the mere fact that Paul is a Roman citizen. He has many more rights than just a captive Jew would have. He cannot just be handed over or mistreated; he has to be treated as a Roman would be. And as Festus looks at Paul, wanting to earn favor with the Jews, here is Paul's response:

To the Jews, I have done no wrong, as you yourself know very well. If then I am a wrongdoer and have committed anything for which I deserve to die, I do not seek to escape death. But if there is nothing to their charges against me, no one can give me up to them. I appeal to Caesar. (Acts 25:10)

You face death by the mob if you go back to Jerusalem (Acts 23), you face death at the emperor's hands if you go to Rome, but Paul knew all along that God wanted him to take the Gospel to Rome. Here was the ticket to Rome. We might wonder why God did not get Paul out, why was there not some kind of payoff, why was there not another Gospel Choir moment and an earthquake or something (Acts 16). The reason is because God is sovereign.

When we look back at the Old Testament, we learn that Paul is not the first to deal with tough times for the sake of the Kingdom. Joseph was sold into slavery, then accused of attempted rape and put in jail; then he interpreted the dream but was forgotten again. Joseph stayed in jail until the time when God wanted him to ascend to the place that He had ordained so Joseph could provide for all the people of Israel during the drought (Gen 50). Or consider Daniel, whom everyone just wanted to find something wrong with but could not, so they decided to throw him in a pit with lions… and when they pulled him out, he had not even been touched.

We can look at this journey of Paul and wonder why? Why would God allow this to happen to a man who was trying so hard to serve him and to be obedient to Him? Paul's question was not why, but rather, how do You want to use me now, Father? John Calvin wrote,

Christ's servants… must be all the more courageous to carry on through good and evil reports; they should not think it anything remarkable that evil is spoken of them when they have done good. At the same time, they must easily defend themselves before men when the opportunity arises.

Paul has hit roadblock after roadblock, detour after detour on his missionary journey. You and I would likely say to Paul, "Perhaps God is closing this door for you. Maybe you just need to wait. Perhaps you need to find something else to do with your life. Things keep going against you; people keep trying to kill you; your plans keep getting derailed." But Paul does not allow the roadblocks or detours to limit the mission that God has given him.

When we experience detours in this life such as a pandemic, lost jobs, attacks by friends, or ridicule, we need to remember the message of Jesus and follow the example of Paul. The detours do not display a closed door but rather an open door, an unexpected door that perhaps we would not have chosen on our own. This is God’s time to get our attention to lead us, for Him to shine in our weakness when our plans fail. His plans reign supremely!

Sometimes we just need to stop asking why and just worship. We need to remember that God has overcome the world, and through Him and through the Gospel, we have one mission and one purpose, and neither one of those can ever be taken away, no matter what attacks come our way.  Paul is not looking to escape death but rather is boldly declaring the Gospel to King Agrippa, Bernice, and Festus in front of a crowd: "King Agrippa, do you believe the prophets? I know that you believe" (Acts 26:27).

Are we willing to step away from our "freedom" and embrace worship, embrace what it means to be a follower of Jesus, to boldly proclaim the Gospel wherever He has us today?

I Don't Want to be Their Pastor 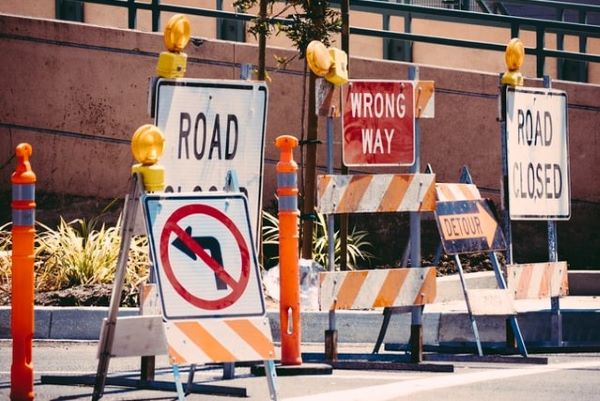 When Detours Lead to Unexpected Doors

Our Father in Heaven